Ever since I took my first step onto Sicilian soil I have been obsessed with the place.
It is magnificent, mysterious and beautiful. Overwhelmingly beautiful.
But with a secret darkness to it.
I just can't get enough. 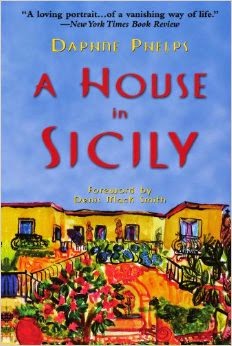 As such, I read books about Sicily, books set in Sicily, fiction, non fiction - anything I can get my hands on.

One of the absolute treasures I found was a book called "A House In Sicily" by Daphne Phelps.
This is an autobiography that takes place in lovely Taormina, overlooking the Ionian Sea. A picturesque little town that holds a piece of my heart, or that maybe I'm holding in my heart. Not sure which.
Daphne lived in dreary old England, damp and grey, then inherited a magnificent home built by her uncle in sun drenched Taormina.
She moves to Sicily, and this is her story of life at Casa Cuseni.


Writers and artists drop by and stay for weeks and months.
She tackles the trials and tribulations of life in this little mountain town, at the same time basking in the glory of living in a place more beautiful than words can describe.

Great reading for lovers of Under The Tuscan Sun and
A Year In Provence.
Her home, Casa Cuseni, remains the star of the story, it's beauty the perpetual subtext.

Returning to Taormina this year I was determined to find
Casa Cuseni.
Which was actually really easy.
Daphne died in 2005 and willed the house to her nieces who preferred the rain in Britain to the sun in Sicily, and opted to sell it instead of relocating.
I would give almost anything to move there and own that home! I still cannot believe they let it go.

The new owners have made it into a bed and breakfast, and were more than happy to let me come visit, and look around.
Casa Cuseni is truly magnificent.
Much of it has been kept as it was in the book.
Daphne's treasures are still there, along with her passports and personal papers.

My host for the day, Salvatore Spadro, showed me many of the belongings she talks about in her book.

We strolled through the art filled rooms and the gardens, Salvatore filling me in on the history behind every room, every piece of art, every corner of the beautiful gardens.
We sat on the terrace taking in the view, while he told me more stories.

It was just magical.
When we were about to leave he asked if I would like to see the Picassos.
Picasso had stayed at Casa Cuseni, and left the works he painted while he was there.
I still can't quite believe I was able to spend quality time with Picassos that don't live in any museum, that aren't featured in any coffee table books. That pretty much no one else sees.
If you are planning to travel Sicily, look into staying at Casa Cuseni in Taormina for a few days.
There are only 6 bedrooms, so they do book out a long time in advance, but you can email them directly ( casacuseni@gmail.com) and see what openings they do have.
Check out the Casa Cuseni website here

If you enjoy reading books about people relocating to glorious homes in Italy and building a life there (my favorite subject!), pick up a copy of A House In Italy by Daphne Phelps here.