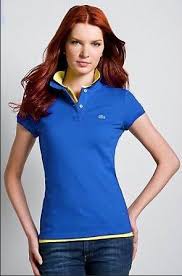 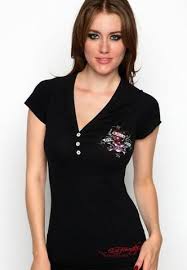 A T-shirt (T shirt or tee) is a style of shirt. A T-shirt's defining characteristic is the T shape made with the body and sleeves. It is normally associated with short sleeves, a round neck line, and no collar. However, it may also include long sleeves, buttons, collars, or v-necks.
T-shirts are typically made of cotton fibers (sometimes others), knitted together in a jersey stitch that gives a T-shirt its distinctive soft texture. The majority of modern T-shirts have a body that is made from a continuously woven tube, so the torso has no side seams. This is accomplished with special weaving machines called circular looms, which produce seamless fabric for tube tops, stockings, and the like. Conventional stitching is used for the waist band, neck band, sleeves and to close the shoulders. The manufacture of T-shirts has become highly automated, and may include fabric cutting by laser or water jet.
T-shirt fashions include many styles for both men and women, and for all age groups, including baby, youth, teen, adult and elderly sizes.
The T-shirt evolved from undergarments used in the 19th century, through cutting the one-piece "union suit" underwear into separate top and bottom garments, with the top long enough to tuck under the waistband of the bottoms. T-shirts, with and without buttons, were adopted by miners and stevedores during the late 19th century as a convenient covering for hot environments.
T-shirts, as a slip-on garment without buttons, originally became popular in the United States when they were issued by the U.S. Navy during or following the Spanish American War. These were a crew-necked, short-sleeved, white cotton undershirt to be worn under a uniform. It became common for sailors and Marines in work parties, the early submarines, and tropical climates to remove their uniform "jacket", wearing (and soiling) only the undershirt.[1]
Named the T-shirt due to the shape of the garment's outline, it soon became popular as a bottom layer of clothing for workers in various industries, including agriculture. The T-shirt was easily fitted, easily cleaned, and inexpensive, and for this reason it became the shirt of choice for young boys. Boys' shirts were made in various colors and patterns. By the Great Depression, the T-shirt was often the default garment to be worn when doing farm or ranch chores, as well as other times when modesty called for a torso covering but conditions called for lightweight fabrics.[1]
8:43 PM
Unknown
Latest T Shirt, T-Shirt, Women fashion